A friend of mine, the amazingly talented writer, speaker and science geek, has given me a hearty recommendation for A.C. Frieden which means (because she has never steered me wrong) that I am on board. 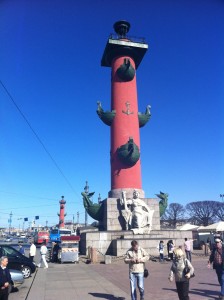 Frieden has an official website, and Tranquility Denied is already on my kindle.  The book’s protagonist, Jonathan Brooks, uncovers a plot involving Navy secrets and cold war corruption that takes him from New Orleans to Moscow.  What could be better?

Fair disclosure that Frieden’s biography is eerily like my own.  He is an intellectual property attorney, has a bit of a thing going with Russia, and he writes espionage thrillers/mysteries.  Not sure if this makes me biased, but based on his positive reviews and sales, I’m not alone.

Plus, Sue, a fellow reader of Frieden’s at Printer’s Row in Chicago this past weekend, was very intrigued by his writing,.  So, enough for me.   I hope to review one of his books soon – let me know if you’ve already read some.

Yes, this is primarily a blog about mystery books.  But not exclusively.  So, as I ponder the latest mystery books I’m reading – Ian Rankin’s, Resurrection Men, and Simon Sebag-Montefiore’s, One Night in Winter, I thought I’d share some other “mysteries” that confront me on a daily basis.

First, the musical playlists of my fellow gym rats.  I’m in the “weights” section of my local gym 5 or 6 days a week, though by looking at me you’d never guess.  Yesterday, a guy I recognize but don’t know — maybe late 50′s/early 60′s was standing by a universal set and just nodding his head up and down, clearly to some mysterious beat.  As I, myself, was doing squats and grooving to Young MC’s Bust a Move, I wondered what was on his playlist.  My playlist, at least my current workout playlist, is an odd mix of ancient, not-quite-so-ancient, and soooo last year (as my daughter, Robin, would say):  Queen, The Proclaimers, The Strokes, The Violent Femmes, The Talking Heads, Pitbull, Blink-182, Bloc Party, Fallout Boy, and Florida Georgia Line, to name just a few.  As I watched him, I was guessing maybe he was rockin’ to Robert Palmer, or Bon Jovi, or maybe Foreigner.  But, I’m probably way off.  He could be a Chief Keef fan for all I know.

As I turned my attention to the rest of the lifters on our side of the gym, I spent far too much time trying to guess what was on their respective playlists.  Most of my fellow “lifters” at the time were high school or college boy-men, so it is no stretch to assume that Drake, Kanye, JayZ, Lil Wayne, 2 Chainz and French Montana were in heavy rotation.  A few younger women were there, and I wasn’t leaning as far to the hip-hop mode with them.  But I’m also thinking Taylor Swift and Katy Perry weren’t in the rotation for these heavily tattooed chicks.  Maybe JUSTICE, Lily Allen, Kesha?  The point is, I’ll never know – it is, indeed, a mystery.  And, like books, I’m sure if I polled my fellow gym rats, I’d learn from their playlists that you can’t judge a book by its cover.

Happy reading, and lifting, and doing whatever it is you do!  And, if you have suggestions for my workout playlist, let me know!