It’s the most wonderful time of the year . . . with the possible exception of back-to-school week after a long and full summer.   But, is it a time for murder most foul?  I say YES!!

As Otto Penzler, editor of The Big Book of Christmas Mysteries, reminds us:

It is no great profundity to exclaim that Christmas is the happiest time of the year for all but the most churlish, those who claim they can’t wait for the season to be over because they hate the forced (to them) cheerfulness, the religious aspects of the celebration of the birth of Jesus Christ (though, of course, there is no biblical or other evidence to suggest that Jesus was born on December 25), or the crass commercialism of the whole thing. 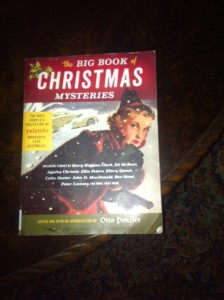 Well, speaking as a non-curmudgeon of the cheerful, baking, shopping and decorating type, I liked it too.  The BBoCM has something for everyone.  Penzler divides the short stories into several categories:  A Traditional Little Christmas, featuring stories from Agatha Christie, Ellery Queen and Colin Dexter; A Funny Little Christmas, with pieces by John Mortimer and Damon Runyon among others; A Sherlockian Little Christmas, including a  story by Arthur Conan Doyle himself; A Pulpy Little Christmas; An Uncanny Little Christmas; A Scary Little Christmas; A Surprising Little Christmas; A Modern Little Christmas; A Puzzling Little Christmas; and A Classic Little Christmas.  Coming in at 650 pages, the BBoCM is fighting in the same weight class as the Russian fiction classics.  But Penzler’s groupings and story choices are brilliant and leave the reader breezing through the book.  Most pieces are around 10 pages (albeit 10 LARGE pages in double-column and somewhat small font type that challenges the notion that I do not yet need reading glasses).  Just the right length to polish off a story or two at night or in between meetings or events during this otherwise busy time of year.  The stories are so tight and classic that the BBoCM also challenges my general tenet that most books can be borrowed or bought via kindle.  Although my hard copy of the BBoCM is currently on loan from the library, I hope my own copy will find its way into my Christmas stocking.

There is so much to highlight in the BBoCM that I’m going to take it in sections, starting with the classic, funny and Sherlockian stories in this post.  The classic section begins with a Hercule Poirot little ditty called The Adventure of the Christmas Pudding.  I remember reading this several years ago, and saw the David Suchet rendition of the story on Masterpiece Mystery a few years ago.  As Penzler says in his overview,

The great talent that Dame Agatha brought to her detective stories was the element of surprise, and what could be more surprising than killing someone at what is meant to be the most peaceful, love-filled time of the year?

This story doesn’t disappoint with surprise murders, impersonations, ingestion of priceless gems and cryptic warnings found in pudding.  I won’t give away the twists and turns, but the opening salvo of the BBoCM is fun and classic indeed.

Gold, Frankincense and Murder by Catherine Aird is a bit more cryptic.  Those who like their mysteries wrapped up in a neat little bow (more along the lines of Christie’s traditional “summing up”) may be a little disappointed.  But, it has a nice, traditional English feel, complete with a country house setting, a retired Foreign Office member and a somewhat flamboyant, young doctor’s wife that is more than just a little shocking to those assembled for Christmas Eve dinner.

The Adventure of the Dauphin’s Doll by Ellery Queen (two cousins collaborated to write under this pseudonym, and also named their detective Ellery Queen) is also worth a try in this section.  The “case” involves a doll collection and an elusive thief (Comus) who warns Queen that he plans to steel a valuable doll right from under Queen’s nose — on Christmas Eve.  The twist at the end isn’t all that unpredictable, but the banter between Queen and his father, and the basic plot points are entertaining.

For my money, Colin Dexter’s “Morse” stories are always worthy.  I’m a huge fan of the books, as well as the British television series Inspector Morse.  (FYI, if you like this character, don’t miss Masterpiece Mystery’s new prequel, Morse, set in the 1960′s, just after Endeavor Morse joins the Oxford police force.  In Morse’s Greatest Mystery we aren’t faced with solving a tough mystery, but instead treated to an inside look at Morse’s “soft-side”.  Short and sweet.

I also enjoyed Mary Roberts Rinehart’s The Butler’s Christmas Eve.  She sets the scene very well, gives us some rich, feisty characters and adds just a touch of intrigue.  Won’t say more, because I don’t want to give anything away, but read this if you like your mysteries on the “spy side”!

In A Funny Little Christmas, I highly recommend John Mortimer’s Rumpole and the Spirit of Christmas.  Again, many of you may recognize the main character in this story from the PBS series, Rumpole of the Bailey.  Mortimer gives Rumpole edge, sarcasm and humor.  His wife, Hilda (aka She Who Must Be Obeyed) adds her own flavor to the story from entirely off-the-page, and other recurring characters including Prosecutor Basil Wigglesworth round out the story nicely. Not a grisly crime or really even a mystery, but entertaining nonetheless.  Based on this sole recommendation, you might guess that I am not a huge fan of “humorous” murders or mysteries, but don’t let that stop you from enjoying the other pieces in this section.

Finally, I loved the Sherlockian Little Christmas section.  Actually, there were some humorous parodies in this section, including one about Detective Herlock Sholmes (Peter Todd’s The Secret in the Pudding Bag & Herlock Sholmes’s Christmas Case) so maybe what I said about not enjoying humorous mysteries is a bit untrue.  If you have read and re-read Sherlock Holmes, you will find the inside jokes and asides in these stories very entertaining.

A Scandal in Winter, by Gillian Linscott isn’t a parody, but is a clear nod to Conan Doyle’s A Scandal in Bohemia.  Holmes and Watson figure prominently as Silver Stick and Square Bear (nicknames given to them by an eleven year old girl, Jessica, who encounters the pair in Switzerland where she is vacationing with her family).  Silver Stick engages Jessica to help clear the name of another holiday guest.  It is tidy, descriptive and a worthy sequel for the Conan Doyle characters.

Edward Hoch’s The Christmas Client offers another enjoyable peek at  Holmes and Watson post-Doyle.  The story even features a cryptic mystery and Holmes’s nemesis, Moriarty.  Like many Holmes stories, it involves blackmail, somewhat scandalous behavior and another literary heavyweight, Lewis Carroll.  Truly clever and tight.

Finally, I really enjoyed re-reading The Adventure of the Blue Carbuncle by Arthur Conan Doyle.  Penzler aptly puts this classic, original at the end of the section, as if to say, you might have enjoyed what came before this but, really, it doesn’t hold a candle to the masterwork.   Maybe that is a slight exaggeration but on re-reading Conan Doyle, I was impressed with how well this story holds up.  Classic Holmes, it involves a mystery within a mystery involving Christmas geese, a missing gemstone and a bit of a scavenger hunt throughout London.

So, for curmudgeons and mystery readers of all types, dive into the BBoCM and get your holiday twist on.  Happy Reading!

Another question I am often asked, or ask myself, is whether I prefer “current” mysteries, set more or less in the here and now, or period mysteries, a la Conan Doyle or Christie.  And the answer is . . . it depends.  When I’m feeling frazzled or stressed – basically my life for the past several years — I tend to the more comfortable, period Christie-type piece.  When I was in college, I worked in the library, pre-cataloguing new Russian acquisitions.  But I also wandered the stacks when I was procrastinating and went down the shelves with Agatha Christie.  One look at my Kindle will show that I have returned to her, re-reading most of my favorites.  I enjoy the formula of these books. 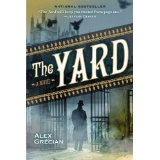 Recently, I’ve read a few new “period” mysteries, enjoying some more than others.  Alex Grecian’s, The Yard, is set in Victorian London, just after the Jack the Ripper cases.  It follows the creation of a Murder Squad, a group of twelve detectives who do nothing but investigate murder.  Grecian’s London has none of the quaint comforts of Christie’s English countryside.  But, it is worth the read nonetheless.  Grecian’s portrayal of London’s gritty underside is so seemingly accurate and compelling, you’d think he had been there.  Inspector Day and his feisty wife, Claire, are enjoyable, central characters and I will likely read future installments about the Murder Squad.