I will blame my friend Sue for my recent lag in posts.  Unfairly, but I will blame her nonetheless because she casually mentioned as our carts passed at the grocery store that I needed to try reading the “Inspector Montalbano” mystery books, set in Sicily (from which she had just returned).  Sixteen books and several weeks later, I am coming up for air, dreaming of chucking it all and moving to the southern Sicilian coast.

Set in Sicily, the books follow Chief Inspector Salvo Montalbano, a fifty-something detective who is disgusted with the rampant corruption that seems to permeate Sicilian (and, indeed, Italian) government and society, but nevertheless is more than willing to bend every rule he encounters in the course of his investigations (albeit, usually, with the admirable quest for “truth and justice” as his rationale).

He is a glutton (mostly for seafood, but certainly for wine and whiskey as well), and  almost always follows his gorgefests with a constitutional walk down the pier to his favorite rock.  Apparently, this keeps away the pounds because he is described (or at least perceived) as fit, sexy and suave.  And, I admit that I envisioned Montalbano much the way TV producers must have —  see the above photo of Luca Zingaretti, the actor who plays Montalbano in the popular TV series.  Salvo believes, as does apparently every man in Sicily, that all young, sexy women want him, and maybe with good reason.   Despite having a long-time girlfriend, Livia (more on her later), he frequently “diverges” with these women, or they end up losing their heads over him, or he over them, or some combination of the above.

Salvo is surrounded by a team every bit as colorful and flawed.  His second-in-command, lothario Mimi Augello, often butts heads with Salvo.  Mimi is more of a rule-follower than Salvo (except when it comes to his wedding vows), and often is team’s tether to the “official” team in Montelusa (based on the actual city of Agrigento) who is usually at odds with our merry band.  Mimi’s exploits with women often lurk in the background, but in one of the more disturbing books, The Potter’s Field, Mimi’s relationship with the prime suspect drives Salvo and the others to act in strange ways.

Detective Fazio is Salvo’s most reliable lieutenant.  He has a “records-office” obsession with dates, names, relationships, a steady relationship with his wife, and more often-than-not, is Salvo’s reluctant conscience.  Catarella is Salvo’s naive, clumsy junior officer, who can’t say or spell a name correctly to save his life, but is also somewhat of a savant with computers.   Prosecutor Tommaseo is the sex-crazed judge, relied on by the team to issue warrants, approve investigations and interrogate attractive, female victims and witnesses.  Doctor Pasquano, the cranky criminal pathologist with a gambling habit, is a worthy foil for Salvo, trading barbs and insults, but every bit as focused as Salvo on nailing the “bad guys”.

For the most part, these books (as I imagine Sicilian society to be) are male-driven.  Salvo has women in his life, but they definitely play a backseat role – there largely for his convenience, both culinary and amorously.  His long-time girlfriend, Livia, lives on the mainland, near Naples in Boccadesso.  She is in her thirties, described as beautiful and hot-headed.  I’m not altogether sure how the two met, and I’m not altogether sure why they stay together.  They fight constantly, disagree about most major issues (morality, religion, government).  In fact, I find myself very often annoyed at Livia, but really, I should find myself annoyed at Salvo who has repeatedly cheated on her, both physically and emotionally, left her stranded at the airport, at his house, or forgotten about her entirely.  My biggest complaint with these books is the Salvo-Livia relationship, largely because I don’t understand what it does for either party.  But, in the end, the relationship is every bit as complicated as those we have in real life, and perhaps Camilleri deserves kudos for offering the reader a realistic picture of sloppy, messy love, as opposed to the saccharine version so often portrayed in books and film.  Perhaps.  I’m still pondering the whole thing.

Another woman in Salvo’s life is his housekeeper, Adelina.  She is a poorly educated but well-meaning woman who cleans and, most importantly, cooks for Salvo.  Her two sons are in and out of jail – described by Camilleri in sort of a “boys will be boys” kind of way that, irritatingly, seems to be the Sicilian reaction to “minor” crimes like robbery and fraud.   She dislikes Livia and disappears whenever Livia is in town.  In fact, when Livia is in town and Adelina is absent, Salvo’s conflict is most apparent — does he choose food or sex?   As I read the books, I was stunned that this conflict even existed for Salvo, but maybe Camilleri is dead right and the only two things worth worrying about for Salvo are his stomach and, well, you know.  Maybe everything else is just the small stuff.

A beautiful, Swedish woman, Ingrid, is also a recurring female character in these books.  Friends with Salvo (sometimes with friends with benefits) she often jumps in to help with an investigation — distracting a suspect with her beauty, identifying victims and suspects through her wide net of connections, or chauffeuring Salvo to and from crime scenes with her stellar driving skills.  Clearly written as an everyman type of fantasy — come on, what man wouldn’t want a gorgeous blond who was also a race-car mechanic? — I asked myself as I read these books why I even liked Ingrid.  In fact, as I re-read my summary of these characters above, particularly, Salvo, I am now asking myself why I like these somewhat misogynistic misfits.   But I really do.  Credit Camilleri for adding depth to what could be otherwise caricatures.  By not glossing over their faults, particularly in the case of Salvo, he endears these characters, and they have burrowed into my good graces like deer tics. 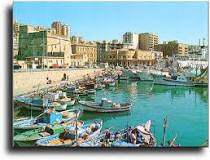 The final, and perhaps, most enjoyable aspect of all of the Montalbano books is the setting.  The fictional town of Vigata, where Montalbano’s team is located, is based on Porto Embedocle (see left).  Montalbano’s house sits on the beach, and its sand, tide and crystal water feature prominently in every book.  Salvo often goes for a swim to clear his head, and many of the books’ plots revolve around water, boats and fishing.  As noted above, Salvo loves food and throughout the books, his discourse on food whets the appetite, literally and figuratively.  He describes his favorite dishes as a loving parent would a child, and relishes them with the same fervor.  He drives for hours to sample a great antipasti, goes into depression when his favorite trattoria, Enzo’s, closes is shutters for good.

Camilleri’s books are more than simply a food lover’s guide to Sicily, they are a veritable travelogue, inviting the reader to learn about her history and landscapes.  Describing everything from Sicily’s weather, road construction (and deconstruction), deserted terrains, city planning, government and religion, Camilleri has truly made Sicily one of the most layered of characters in his series.

I cannot pick a favorite among the Montalbano series — there are sixteen to choose from, with a seventeenth (and, I think, final) on the way in March.  Potters Field and Treasure Hunt were both excellent in terms of mystery development, but also quite disturbing in terms of plot.  I also really enjoyed Voice of the Violin and The Terra Cotta Dog for their emphasis on Sicilian history and culture.

As you pick up these books, I wish you nothing more than to get lost in them as I did, to question and argue with the characters, and to fantasize at the end of it all, that you’ll wake up on a beach in Sicily, just down the way from Enzo’s as he prepares to open for his evening sitting.  Happy reading!