Lest you think that I absolutely love every book that I read, I thought I’d let you know that isn’t true.  Case in point, The Intern’s Handbook by Shane Kuhn.  Now, to be sure, I typically only post about (or review) books that I like.  And as a sometimes writer myself, I am loathe to criticize any book in its entirety.  I mean, completing a book, getting it published (or even self-publishing it) is a BIG deal!  Kudos to all authors who slog through the writing process and put something out there for the universe to peruse.  On that score, and a number of others, Kuhn delivers and deserves great credit.   His is a tight, fast-paced thriller that makes for quick reading.

But, here’s what I had trouble with. 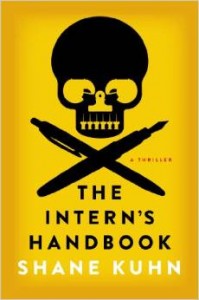 First, Kuhn is obviously not a lawyer but chooses to set his book in the context of a “high powered” NYC law firm.  I’m not opposed to non-lawyers writing about the legal scene — I’m sure most do a better job of it than we do.  But, get it mostly right.  Although it might seem to be the case that law firms should employ law school grads as unpaid interns, that just isn’t how things work; at least not at the “big” firms.  Twenty-five years ago, and still true today, big firms pluck law students for lucrative summer associate gigs, paying extremely high salaries, and wining and dining the students throughout the summer in an effort to convince these students (or very recent grads) that they should come work at the firm.  Now, sure, the legal market is much “tougher” these days than it was when I was in law school.  So, not as much wining and dining goes on, and not as many students get post-summer offers, and not as many get summer associate gigs to begin with.  But, law students get paid and paid big.  They are lawyers (or soon to be lawyers, after all) and know all about wage and hour laws, and labor conditions and word-of-mouth slamming that would kill a firm’s pipeline to the best and brightest coming out of school.

Second, at least as far as I have ever been aware, summer associates, associates, interns — whatever you want to call them — are NOT put through “boot camp” by a drill sergeant type manager, as in Kuhn’s imaginary firm.

Third, Kuhn writes that one of the oldest and most respected NYC firms is headed up by three alive-and-well “name” partners,  each with a somewhat nefarious past that would presumably set them up for the type of “hit” that HR, Inc’s interns would carry out.  The big, established  firms in NYC are “named” for men long since dead, and are “headed” by committees of men (and a few women) — not rogue men with only a couple of decades of practice.  To be sure, there are profitable firms of the type Kuhn describes, but they wouldn’t be in a position to have a huge “summer associate” program and they wouldn’t be the type that most of the top law school grads would be vying to work at.  To be sure, many of these profitable firms are likely run by corrupt partners, but the level at which Kuhn describes would just not exist at the big, established firm he wants us to believe Lago works at.

So, from the get go, I am pissed off at John Lago (the intern-cum-assasin who is writing the “handbook” as a kind of how-to guide for others who may follow in his wake).  I am pissed off at Kuhn for setting the scene so inaccurately, and for no apparent reason.

But, I’m pretty sure Kuhn is not particularly interested in reality.  Rather, he paints a gimmicky tale of orphans who become trained assassins, and then are “planted” as interns in the firms and companies of those who their firm (HR, Inc.) has been hired to take out.   So, putting aside all of the above (which, I recognize, seems pretty nit-picky), I tried to settle down to the book and the “mystery” taking place.  But I was painfully aware that I was reading.  That might not make sense to you, but to me, the truly enjoyable books are ones that I get lost in reading.  I become a part of the world of the characters.  Not so here.  Kuhn’s snark oozes from every word and the whole thing is just too clever by half.

There are twists and turns in the book, to be sure.  Particularly at the end where Lago warns the reader that is “sick of my blathering” to simply stop reading.  I thought about doing that.  But, I kept reading and the ending was not at all what I expected.  So, maybe that is a good thing in a mystery — unpredictability.  The fight scenes are highly readable and I give props to Kuhn for his pacing.  The book is a page-turner for sure and the ending is truly fitting for the tone of the rest of the book.

Kuhn doesn’t play fair with his information though and, in fact, misleads the reader with his DOJ recordings of various conversations between Lago and other antagonists, including the embedded FBI agent, Alice, and Lago’s long-lost father, Marcus.  The technique was a clever way to present the dialogue without Lago narrating or recounting these conversations.  But, at the end of the book, the reader is left wondering WTF?!

If you like crazy action, adrenaline-inducing fight scenes, are not a lawyer and never hope to be one, and can suspend your disbelief, this book may be for you.  If not, then pass it by.  Either way, happy reading! 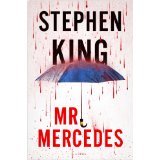 Stephen King’s latest, Mr. Mercedes, just left my bedside table.  And it was a short stay.  Like most of King’s novels, this one was hard to put down.  King has a brilliant way of writing words that read like oxygen, and nitrogen and carbon dioxide enter the body.  In and out they go, without a flinch, without a pause.  It is, for me, the ease of his prose that has fueled the long-term affair I’ve had with King.  His latest, Mr. Mercedes, only ups the ante.

The subject matter, an evil serial killer, is hardly the comfort food for the soul that you might think might stoke a reader’s fire.  But, King’s ability to delve into the mind of the killer, and not make you scream and shiver and throw the book across the room is tribute to his gift.

As far as twist and turn, can’t figure out who did it mystery goes, there is really no “mystery” here.  By page forty (in a 400+ page book), we know who the crazy, maniacal killer is:  Brady Hartsfield.  Despite Hartsfield’s protestations, we know he will strike again, and often we know exactly how he intends to do it.    But, King manages, nevertheless,  to keep us on edge throughout, weaving the trajectories of his main characters, Hartsfield and Det. Ret. Bill Hodges, with nary  a wasted word or phrase.

We discover early on that Brady has carried out a sick and twisted attack on people waiting in line at an early morning job fair, using a stolen Mercedes.  The detectives on the case (including then Det. Hodges) easily trace that Mercedes to Olivia Trelawney, a rich, neurotic widow who is far more concerned about when her car will be returned to her than the countless victims mowed down by her 12-cylinder killing machine.  Describing the scene, King deftly gives a shout-out to himself, conjuring up visions of the murderous Plymouth from Christine (likewise, he later calls out Pennywise from It).  To be sure, the reader will benefit from having read King before, if nothing not for his ability to convey yet another a kick-ass story.  But if this is your first King book, fear not.  Read on, and then pick up more, starting maybe with Doctor Sleep, the sort-of sequel to The Shining.

Anyway, while investigating Mr. Mercedes, the detectives go hard at Mrs. Trelawney, suggesting that her negligence in leaving her car unlocked, with the keys in it, at the very least “enabled” Mr. Mercedes to perpetrate his heinous crime.  We later learn that Hartsfield has manipulated the vulnerable Trelawney into feeling very guilty about his crime, leading to her eventual suicide, a feat he attempts to repeat with the now retired, and very bored, Det. Ret. Hodges.  But Hodges doesn’t respond the way that Hartsfield thinks he will.  He goes full-on rogue, Rambo in an effort to take him down, and enlists some unlikely allies, Jerome, a brilliantly savvy and droll high school student, Janey Trelawney’s sexy, recently-divorced sister, and Holly, Trelawney’s  a painfully neurotic cousin who happens to be a computer savant.

King manages to build suspense even though we are pretty much privy to everything that Hartsfield intends to do.  King is more than willing to “off” major characters (much to my chagrin) but he never invents plot twists or payoffs.  His writing is unwavering in what feels true to what these characters would do or think.

I’ve never met a serial killer, but King makes me feel as if I had after reading this book and I’m not really sure whether that is good or bad.  But, it seems authentic, and is entirely addictive.

Pick up Mr. Mercedes, but not if you have a deadline or have “chos for hos” as Jerome would say.  You won’t get anything much done until you’ve followed Hartsfield, Hodges and crew to the bitter end.  Happy Reading!