A few days ago, a friend asked me what was new in mystery – now that I have a blog and all.  So I thought I’d share a few new (or new to me) mysteries that I plan to read – any you may want to check out. 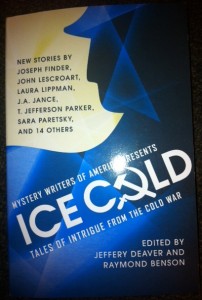 Ice Cold speaks to me — largely because it deals with cold war/Russian intrigue, but also because it consists of several short stories, a format that fits better with my short attention span in summer months.  And I typically enjoy recommendations by the Mystery Writers of America group. 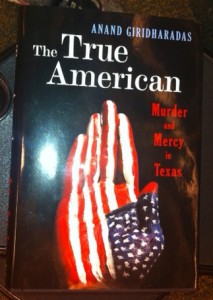 The True American by Anand G is on my kindle, next in line.  I heard the author interviewed — well part of the interview anyway — by Tom Ashbrook, on NPR’s On Point.  He struck me as so intelligent.  Then, a few days later, a friend told me about this book interview she heard with Tom Ashbrook that inspired a church in Normal, IL and it happened to be the interview I partially heard about The True American.  Then I saw the book on the shelves at Barnes & Noble and the cover art was really cool.  So three messages from the universe, and I’m in.  It isn’t a straight up mystery, rather it is a non-fiction account of a murder, but I still find the theme of exploring the American “dream” from different perspectives intriguing. 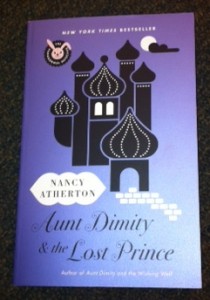 I’m going to give Nancy Atherton’s Aunt Dimity series a try and although AD and the Lost Prince isn’t the most recent in the series, I liked the onion-domed church on the cover.  So, yes, I am a sucker for cover art.  The series seems to fall into the “cozy” fireside category — not one that I am typically too fond of — but I hope it will make a nice poolside read and segue from the darker, Scandinavian fare I’ve been reading lately.

I’ll keep you posted . . . and let me know what you’re planning to read this summer.