I’ve just finished Mary Miley’s two mysteries and they are an enjoyable, historical era treat.  She channels the 1920′s beautifully, allowing the reader to enjoy not only the traditional, mystery escape, but also to fully escape into another era.  Miley’s attention to detail (emphasizing clothing, food, transportation and lodging of the 1920′s) is mesmerizing — probably my favorite part of these books.  The “mystery” angle is enjoyable as well, but very straightforward without many unexpected twists and turns. 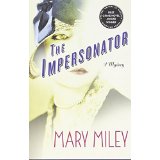 Her first novel in the series, The Impersonator, introduces us to her young protagonist, Jessie.  Actually, that isn’t really the character’s name, but for the bulk of the novel (and in the second novel) this is the name she uses so I’ll use it also.  Jessie has grown up on the vaudeville stage, traveling the  Big Time circuit (two performances per day).  She is plucky, smart, independent and (mostly) fearless.  After her steady gig disbands and she has no luck finding another role in the Big Time — or in the lesser circuits that required five or more performances per day — Jessie reconsiders a “job” offered by a wealthy patron in Omaha.  She has to impersonate his missing niece and heiress, Jessie Carr, a girl with whom she shares a remarkable resemblance.  Jessie reluctantly takes on the role but when she travels west to Oregon to meet the family she decides that she really is fond of them, well most of them, and doesn’t want to continue to deceive them.   When a handful of unsolved murders occur in the small Oregon town, she finds herself knee deep in solving the mystery of the real Jessie’s disappearance.  She and her supposed half-brother, David Murray, team up to discover what happened to Jessie and when the resolution is revealed, well, lots of things are turned upside down including Jessie’s not really inappropriate, but definitely awkward relationship with David. 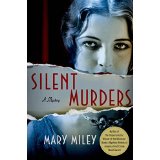 Things wrap up fairly well for Jessie, as we learn when Miley’s second novel, Silent Murders, opens.  Jessie has travelled from Oregon to San Francisco and then down to Los Angeles where she ends up working as a “girl Friday” for her idol, Mary Pickford, and her husband, Douglas Fairbanks, at their newly formed studio, United Artists.  Jessie wants to break into the new motion picture business but is working as an assistant script girl when she and her roommate (Myrna Loy) are invited to a Hollywood party where the host is murdered.  Jessie finds herself in the thick of the investigation, as the prime suspect, when an old vaudeville friend of her mother’s, Esther, is also murdered.  Esther had been serving at the party and had invited Jessie over the next day to see some of her mother’s old playbills.  Jessie discovers Esther’s body and realizes the two murders are probably linked.  When two more people are killed, Jessie tries to connect the dots, working with Douglas Fairbanks and Mary Pickford along the way.

The famous characters popping up in Jessie’s life (Myrna Loy is also friends with an up-and-coming young actor, Gary Cooper; Jessie befriends Charlie Chaplin’s young wife, etc.) become almost too distracting.  But Miley has deftly woven a fictional murder mystery against a true backdrop — and borrows from or refers to actual murders that took place in Hollywood around this time.  It is fun to read about how these actors “started” and the fledgling motion picture business.

Jessie again encounters David Murray (know going by the name David Carr) and can’t quite sort out her feelings for him, or for the only honest cop she meets, Carl Delaney.  I would have liked those relationships to have played a slightly larger role here (or come to some resolution), but perhaps Miley is just saving these plot lines for book number three in the Jessie series.

Jessie’s ability to solve the first set of murders seems a little too pat and easy, but the solution to the second set of murders is more compelling, interesting and, frankly, more believable.  This book gives the reader a few more twists than the first novel — police corruption, illegal drug trading, and poisoning — and the setting will probably seem a little more familiar to most readers.  Again, the actual mystery aspect of these books is pretty straightforward and that’s okay.  I’m just noting for those who like their mysteries a little more convoluted or twisted, these novels may not fully satisfy.  But, I do think the setting and the personality of the main character, Jessie, makes up for the plot and make these books an enjoyable read for anyone.  I’m looking forward to what Jessie is up to next . . .