I’ll cop to the occasional Netflix binge-fest.  When my back was out of whack last winter, I barely ate, bathed or drank — not because I was in so much pain, but because I didn’t want to stop my episodes of Dexter long enough to do any of said activities.  And I read.  A lot.  But usually I don’t find myself re-reading, or binge reading one author all the time.  I flit from book to book, savoring my favorites in between not-so-greats.  That changed late last December.

A few days before Christmas, I was surprised to see an Amazon box outside the front door.  I got my money’s worth out of AmazonPrime over the holidays, don’t get me wrong.  But all of the presents I had ordered were already opened and accounted for.  I asked my husband if he had ordered anything and he said, “No”.  The package was addressed to me, so I opened it. 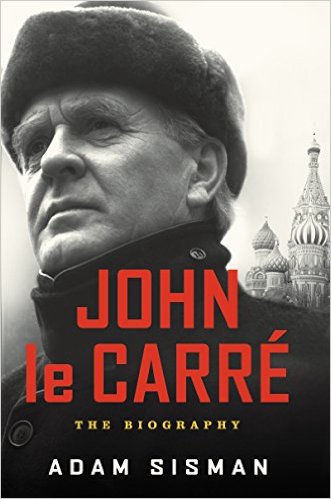 And, inside, much to my surprise, I saw Adam Sisman’s biography of John le Carre.  “What a great present for myself,” I thought.  “I don’t even remember ordering it!”  Again, I asked said husband who denied knowledge or culpability of the book.  My son, a university student, couldn’t possibly have:  (a) completed an Amazon order with proper payment and address information, (b) figured out what someone other than he, himself wanted for a present, or (c ) cared what someone other than he,  himself wanted for a present.  So, he was right out.  That left my own addled memory of whether I had self-gifted it to myself (a strong contender) and my sixteen year-old daughter.  I went with her.  Later, I asked my mother who confirmed that, yes, they had come up with the idea during a shopping trip to Barnes & Noble and she had ordered the book as a Christmas present.  I’m not quite sure how they came up with the idea at Barnes & Noble if they hadn’t, in fact, seen the book — which begs the question of why they didn’t buy the book in the store — but I digress.  I didn’t let on to my daughter that I had seen the book and squealed with delight when I opened it on Christmas morning.  And, she never reads this blog, so I know she won’t figure out that I knew ahead of time.

I spent the next couple of days immersed in the life of David Cornwell, aka John le Carre.  Sisman’s biography rivals one of my favorites of all time — Simon Sebag Montefiorre’s biography of Stalin, Court of the Red Tsar.  It is direct, detailed, honest, and paints the picture of a brilliant, flawed writer and citizen.  After devouring the highs and lows of Cornwell’s life, I was gob-smacked by how autobiographical many of his books are.  I’ve been a long reader and lover of le Carre, and after learning about Cornwell’s relationship with his father, his limited time in the British secret service and his international travels, I was anxious to re-read his books.

And since late December, I’ve done little else.  I’ve sort of fallen in love with George Smiley all over again, nodded to myself at Cornwell’s inside jokes and jabs, and appreciated the context in which each of his novels was written. 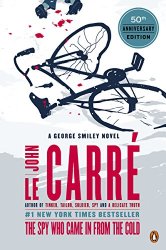 Certainly, The Spy Who Came In From The Cold was what “started it all” for him and, if you haven’t read any le Carre, this book would be a great place to start.  It is a deftly woven tale, with more “mystery” than many of his thrillers.  Leamus took on a new identity for me — part Cornwell, himself;  part general malaise; part the insanity of the divided Berlin and Germany that faced the world at the time of writing.  George Smiley makes a tiny appearance, but really I had to go back to Cornwell’s earlier “murder mystery” to re-introduce myself to Smiley.

In A Murder of Quality, le Carre takes the reader to a British public school (what most of us would know as a prep school or boarding school) where a master’s wife has been killed and Smiley is brought into the scene by a former war-time colleague (the female editor of a Christian periodical who had a letter from the woman predicting her demise).  George also worked closely with the brother of the headmaster, and, thus, had an entree into the school to investigate the woman’s murder.  He encounters a soon-to-be-retired police superintendent, Mendel, who reappears in many subsequent Smiley novels.  Anyway, as english manor murder mysteries go, A Murder of Quality, is a little too predictable and contrived, but I didn’t — and don’t — care.  George Smiley was born and I’d follow that character almost anywhere.

So, I read A Call for the Dead and The Looking Glass War, and detoured to A Perfect Spy (Cornwell’s most autobiographical novel).  But then I cleared my schedule for the “Karla” trilogy again — the three books where Smiley matches wits with “Karla” (the Moscow Centre mastermind) either indirectly through Karla’s networks and moles — in Tinker, Tailor, Soldier, Spy and The Honorouable Schoolboy – or, directly, in the last of the trio, Smiley’s People.  These three books are sweeping, cold-war epics that feed my should.  From Smiley’s quiet, melancholic brilliance, to Guillam’s rash but far more grounded actions, I can’t get enough of le Carre’s nuanced characters.  I’ve read more than my share of “classic” literature, and le Carre takes a back seat to no one with his character development and plotting.  “These people are my friends,” I tell myself.  I believe it.  In part.  I care about them, though, in reality, I know they don’t care about me. But in re-reading le Carre over this past month, it is crystal clear that he cares about me, as a reader.  He doesn’t always tie up his mysteries (or thrillers) neatly.  I know, for example,  no matter how many times I re-read it, The Spy Who Came in from the Cold, won’t end any differently.  But that isn’t because le Carre is flippant about his readers.  I get the very real sense that he agonizes over every word and scene, to paint a picture for us.  To bring us into a world or an issue.  To introduce us to a character or a friend.  I can’t think of a better way to have spent the last month of my reading time binging le Carre, and I can’t think of better advice for you.

And to my daughter and Mr. Cornwell — “thank you”.  I doubt either of you will read this, but I’ll put it out there anyway.