A.C. Frieden’s eager protagonist in Tranquility Denied, Jonathan Brooks,  is a refreshing character and one that I will continue to follow.  For more about Frieden, and this series, check out his website.

Frieden, himself an attorney who has lived in many places around the world, clearly draws on his own background in giving us Brooks — a young attorney who follows evidence around the globe to solve a mystery involving the U.S. navy, his client, and his deceased brother. 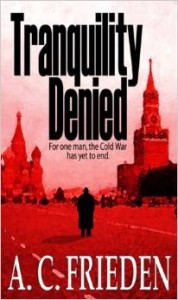 As an attorney myself, I found Frieden’s descriptions of the legal practice (and Brooks’ reactions to it) incredibly on point:

Multitasking was never Jonathan’s favorite part about practicing law.  It was a life interrupted – constant interruption – combined with a requirement to know as much as possible about any given case at any moment and for any reason, important or not.  He was engaged in a profession that demanded endless juggling acts with cases, some small, some large, many dully, most demanding a high level of attention necessary to retain client satisfaction and not instigate a malpractice claim.

Poignant description of the legal profession that anyone anticipating a career in law should read prior to attending law school.  Although I personally love multi-tasking, the whole “important or not” thing really gets to me — the need to know everything at all times is an almost impossible standard and one that Frieden imbues to Brooks very believably.

It is Brooks’ ability to seize on what is important (and what importantly hasn’t been disclosed in a case concerning the ostensible collision of his client’s ship with a U.S. Navy carrier) that leads him on a quest from New Orleans to D.C. to Sweden to Russia, and back again.

Although Brooks’ visit to Sweden is critical to the plot, it was his time spent in Moscow (and her surrounds) that I most enjoyed.  Frieden has clearly, himself, spent time in Russia, capturing her swagger, lawlessness, and slightly dilapidated splendor with true panache.  In an exchange between Brooks and his Russian “co-counsel”, Alexandre, Frieden beautifully conveys Russia’s imperfect perfection:

Let me give you an insight into today’s Russia with this joke [says Alexandre]:  Clinton and Yeltsin arrive at the gates of hell.  They are given a choice to reside either in the American zone, where you must eat one bucket of shit every day, or the Russian zone, where you must eat two a day.  So, Clinton, wanting less shit, picks the American zone, and Yeltsin, drunk as usual but retaining a bit of wisdom, picks the Russian zone.  A few weeks later, they meet again, and Yeltsin asks how things are.  ‘Great!’ Clinton says, ‘you devour the bucket of shit in the morning, and then you’re free to do anything you want the rest of the day.  How about you?’  Yeltsin shrugs his shoulders and answers, ‘Same as always – they never make the shit or, if they do, there are no buckets to go around.’”

Worth reading the book just for that.

I was intrigued by Jonathan’s trek through secret, underground tunnels into (and out of) the Kremlin, along with the bad-ass female hit-woman/mobstress/spy, Mariya.  Frieden’s blends just enough of the plausible, with highly unlikely, bombs exploding just as the hero exits the building action to make the reader want to turn the page.  And a page turner it is for anyone who enjoys the sort of government conspiracy, cold war spy thriller that ends with a tidy twist (which I have no intention of giving away).  If you find Jonathan Brooks just a little too naive and eager at the beginning of the book, you’ll find that he has tempered quite nicely by its conclusion.

Enjoy Tranquility Denied by the pool or beach for an entertaining, quick read!