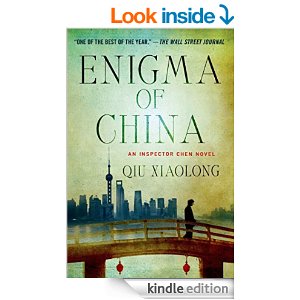 Qiu Xiaolong may not be planning any return trips to China after his latest (or perhaps penultimate) installment of the Inspector Chen series, The Enigma of China.  It is an indictment of China’s one-party system and the characteristics in place that allow corruption to thrive in this system, and among its top officials.  But, Qiu manages to imbue his indictment with a level of propriety that to a non-Chinese is frankly, an enigma.  Had I been in Qiu’s position, forced to leave my country for supporting dissent and open dialogue, I doubt that I would keep any indictment of the system from simply diverging into a blithering, rant.  Qiu’s tone, his fascination with both old and new China, his reference to traditional poetry, all make for a unique and highly enjoyable novel.

After reading several of the Inspector Chen books, I was anxious to discover Qiu’s background — is he a poet like Chen?  He obviously is an English-speaker, but is he also a translate, like Chenr?  Is he from Shanghai?  I learned that Qiu did, like Chen, grow up in Shanghai.  He is perhaps a little older than Chen Cao, born in 1953.  I also learned that he visited the U.S. in the late 80′s (to work on a translation or compilation of T.S. Eliot works), but following the Tiananmen Square protests in 1989, Qiu’s prior fund-raising activities on behalf of some of the activist students compelled him to remain in the U.S. where he still resides.  I am not sure whether he was actually denied re-entry into China, or decided it would be in no one’s best interest to return, and I am not sure whether he has since returned, although I am anxious to find out.

By the time we read The Enigma of China (the eighth book in the series), Inspector Chen has become the Deputy Party Secretary of the Shanghai Police Department, the likely successor to Party Secretary Li.  His relationship with Li, however, has become quite strained as Chen’s ethics have led him to diverge from acting “solely in the interests of the Party” on more than one occasion.

The book opens with Chen at a meeting of the Writers’ Association, where he is listening to a speech about “the enigma of China”:

The enigma of China.  What’s that?  Well, there’s a popular political catchphrase – socialism with Chinese characteristics – which is indeed an umbrella term for many enigmatic things.  Things that are called socialist or communist in our Party’s newspapers but are in practice actually capitalistic, primitive or crony capitalistic, and utterly materialistic.  And feudalistic, in that the children of high cadres- or princes-are themselves high cadres: the ‘red trustworthy,’ or the successors in our one-party system.

So, from page one, Qiu sets the tone for the book – a pretty scathing look at the corruption and machinations of China’s one-party system.

Chen is asked to be a “consultant” on an investigation into the death of Zhou Keng, director of the Shanghai Housing Development Committee who had apparently committed suicide after being shuangguied.  When I first read the term shuangguied, I thought maybe Qiu had used a different spelling for something like the term “Shanghai-ed” (a term that i have heard used in vague reference to someone who had been coerced into doing something against his will).  Actually, Qiu explains that the term is:

a sort of extralegal detention by the Party disciplinary parties, . . . beg[u]n as a response to the uncontrollable corruption of the one-party system.

I had never heard the term before, but have since learned that the process (or really, the “lack” of process) of shuanggui is a major issue for high cadre Party officials, exercised by the Party’s interdisciplinary committee, almost always out of the public eye, and often with devastating results, such as in the Zhou case. 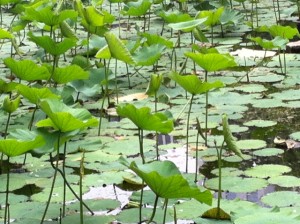 Chen reluctantly agrees to work as a consultant to Detective Wei on the matter, also dealing with China’s version of “internal affairs”, a team from the city government, the Shanghai Party Discipline Committee, and later group from Beijing’s Disciplinary Committee.  As Qiu explains, the police have no jurisdiction over the shuanggui process, but if Zhou had been murdered (as Wei increasingly suspects), the Police would have jurisdiction over his murder.

The main plot of the book follows a “human-flesh search”, another seemingly unique characteristic of Chinese socialism, whereby high Party officials are scrutinized for public signs of excess and corruption (i.e., high-priced clothing, cars, accessories, or (in Zhou’s case) cigarettes), and then a virtual flash mob is enlisted to find other “evidence” of excess, often leading to the official’s downfall.  In the book, Qiu begins the human flesh search with a photo Zhou in a Party newspaper addressing the media flanked by a pack of 95 Supreme Majesty cigarettes, a very expensive brand apparently beyond the legitimate means of someone in Zhou’s position.  As head of the Shanghai Housing Committee, Zhou was an easy person to hate.  As in real life, Shanghai housing prices had all but driven out all but the most elite, and had left average or evening up-and-coming Shanghai-ese unable to move out or up.  When the picture of the 95 Supreme Majesty surfaced, a blogger and erstwhile hacker  encouraged others to engage in a “human flesh search” to find evidence of Zhou’s corruption.  The feeding frenzy began, with countless other pictures surfacing, ultimately leading to Zhou’s shuanggui and death.

The plot is excellent even if the prose is somewhat stilted.  Actually, I think that stilted is more negative than I mean.  The prose rings very true to how the characters would likely interact, perhaps more formally given their respective (and often hidden) agendas, and what is at stake if any of them fail.  The dialogue Qiu employs is quite direct, perhaps a little abrupt, perhaps also a reflection of the differences between American and Chinese speech patterns.  With one exception being Qiu’s use of traditional Chinese poetry, which does tend to add a more sentimental, flowery tone to the book.

Corruption is another rampant theme throughout the novel, and more than ever, Chen (perhaps reflecting Qiu’s personal view?) is bitter about it.   He opts out of meetings, speeches and Party gatherings, assuming they will be pointless, contrived and a general waste of time.  Cautiously sharing Chen’s malaise is Lianping, a newspaper reporter for Wenhui Daily,  the Party paper that first published the infamous 95 Supreme Majesty picture.  Lianping is young, attractive, ambitious and knowledgeable about the burgeoning Internet and human-flesh phenomenon plaguing the Party.  She and Chen are also obviously attracted to each other, but proceed cautiously in their meetings and relationship.  Lianping, like Mr. Gu or Overseas Liu in other books, reflects the new face of China, although unlike those other characters and more like Chen, Lianping hasn’t quite embraced all that is new and sleek with open arms.

When Wei is mysteriously run down by a car and killed, Chen takes a greater interest in the case, believing that Wei’s death was no accident.  (On a side note,  I can personally attest that walking in Shanghai and, in particular, crossing the streets there, is a highly dangerous endeavor.  On my last trip, I was “grazed” by a speeding car while crossing a street (with the light) and had many other near-misses that made me more than happy to walk out of my way to walk up, up, up and over most roads on the newly built Shanghai overpasses). 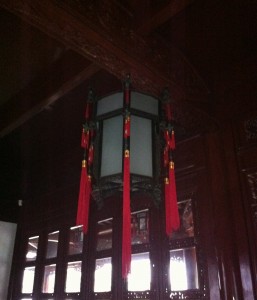 Anyway, Chen turns to Lianping for help, and her tips lead Chen to Melong, an underground hacker, and to Fang, Zhou’s “little secretary” (a term for a mistress/secretary among high Party cadres).  These tips, and some personal sleuthing at the shuanggui hotel and a nearby Internet cafe, ultimately help Chen to solve the motive for the murders of Zhou and Wei.   As the reader can guess, both were taken out by other high Party officials, afraid that, if left alive, Zhou and Wei would spill evidence of their corruption.  Indeed, as Qiu describes them — they were a “chain of crabs bound together on a straw rope — all connected.”

Chen ultimately retrieves evidence of corruption committed by other officials (Zhou saved information via flash drive as a form of insurance policy).   What Chen does with the information on that drive, and who he trusts with the information, is not something I (or, at least in part, Qiu) will reveal.  So, expect a bit of a cliff hanger as to how Chen resolves the matter, his future with the Shanghai Police Department and, indeed, with the Party itself at the end.

Not a huge fan of cliff hangers, particularly with mystery books, but because the mystery itself is solved in the pages of the book, the uncertainty over Chen’s future is not only authentic but pretty easy to swallow.